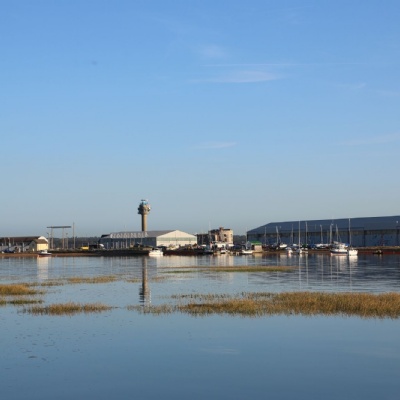 The excitement was palpable when we arrived safely at Calshot Activity Centre today.

Undaunted by the squally showers, everyone made their way to their respective dormitory and unpacked. All duvets, bedsheets and pillowcases were successfully navigated, eventually!

After an ample and tasty lunch (pizza and children were surely made for each other), it was time for each group to try their first activity for the week. Robust rafts were constructed, walls were climbed valiantly and skis were applied to somewhat trembling feet!

Two groups also ventured forth onto the Solent and, whilst ferries, container ships and yachts sailed around them, a plethora of fish, crabs and molluscs were hauled onto the trawler. Rare, spiny dragonet fish living near Southampton - who knew?!

Having been refreshed at dinner time with copious amounts of sausage, mash, cauliflower cheese and chocolate cake, the children then began the evening entertainment. Some expended the last of their energy on a round of raucous and competitive games whilst others had a more relaxing time watching a movie and eating popcorn. Then there was the egg drop - let's just say it got rather messy at the end..!

And that's just been Monday! Phew! Now for the children's first night in the dormitories. Hopefully, as Shakespeare said, 'to sleep, perchance to dream'. At least, that's the plan..!