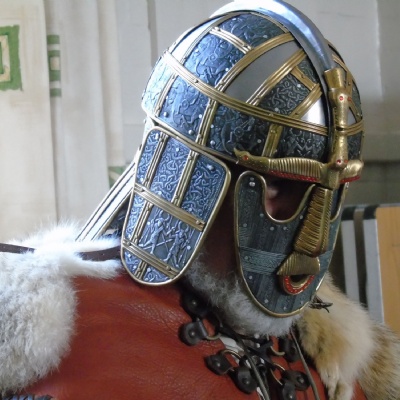 Year 4 enjoyed their trip to Oxenwood...

On Tuesday 19th and Thursday 21st September, Year 4 enjoyed their visit to Oxenwood Activities Centre, near Marlborough in Wiltshire.  We were greeted by a Saxon warrior, who also happened to be an outstanding story-teller. King Alfred and King Hrothgar were also members of the greeting party.  We arrived full of hope that we would learn more about the Anglo-Saxons; we were not disappointed.

The day included learning how to make an Anglo-Saxon torque (bracelet) by twisting silver wire.  The pupils had to work collaboratively and, as they soon discovered, it was not as easy as it looked.  However, as always, our children persevered and had a great momento to take home with them. They also had the experience of handling a wide range of artefacts first-hand such as:  chainmail, swords, shields, jewellery and ear-pickers (yuk)! Next, it was time to train on the battlefield.  Our year 4 pupils learnt how to make a shield-wall and defend themselves from the advancing enemy (the teachers, LSAs and parents!).  The grounds at Oxenwood are fantastic for such adventures and well-resourced for supporting learning in the outdoors.  We hasten to add that the adults did use spongy balls and javelins during the battle!

Some children then experienced a Saxon voyage across the seas in a replica Saxon boat whilst others heard about the incredible story of Beowulf as they sat in the roundhouse made of straw, wattle and daub. The children were encouraged to participate in drama and role-play as the story met it’s grizzly end… even though some of them nearly jumped through the roof in fright as the intensity of the story heightened and the story-teller drew them in.

All in all, it was a fantastic day which the children enjoyed immensely.  It has enriched their learning and has made them hungry to find out more.