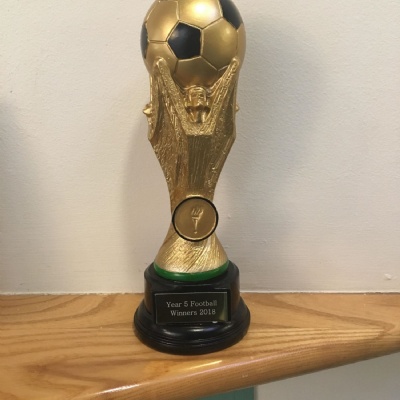 10 boys perform wonderfully, winning 6 games and not conceding a goal!

On Monday 17th September, a group of 10 boys from St Mary’s travelled to the War Memorial Park, in preparation for the school’s football tournament.

Our first match was against Chalk Ridge and we managed a closely fought 1-0 win. As the boys got into their stride, we won the next two games 4-0, meaning we topped our group and went through into the quarter final stage not having conceded a goal.

Into the quarter finals, the other teams were strong and we had to dig deep to progress. A hard fought 2-0 win against Cliddesden meant we set up a semi-final against Ashford Hill.

Both teams appeared strong and at full time we were still locked at 0-0. Few chances had presented themselves so it was left to penalties to decide who would go through to the final. We chose to go fist and scored, while Ashford Hill followed up with a goal of their own. Nicolas then scored our second before a great save saw St Mary’s get an opportunity to go into the final and Connor coolly placed the ball into the bottom corner to send us through.

After 5 games it was time for the final against a strong looking St Bede’s team. At half time the teams were evenly matched. In the second half, the fresh legs of James made the difference as we went 1-0 up. We managed to hold on as St Bede’s pressed for an equaliser and we came away with the trophy and the chance to represent Basingstoke at the county final.