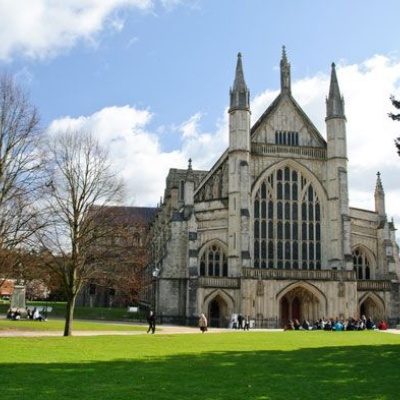 On Wednesday 19th June I was fortunate enough to accompany Year 6...

On Wednesday 19th June I was fortunate enough to accompany Year 6 and their teachers to Winchester Cathedral for Leavers’ Day.

There was great excitement as we boarded the bus and journeyed down to Winchester. Once there, as we walked through the ancient alleyways on our way to the cathedral, those pupils who had not been there before were fascinated by the sight of old stone coffins in an exposed archaeological site as we went by.

We were warmly greeted by cathedral volunteers and assembled to listen to a welcome and briefing about the day which was entitled Bee Inspired, all about the vital role bees play in our world.

We then split into groups to do various activities which included singing workshops and planting the flowers we had brought in the grounds surrounding the cathedral.

My group was doing Bumblebees. We were shown real bumblebees which had died naturally and we could examine under a microscope, we donned yellow glasses and looked in a special box to see what bumblebees see when they zone in on flowers and finally, a quiz all about bees. The leaders of the activity were astounded at the knowledge of our pupils and told us they were hugely impressed so top marks for St Mary’s.

A tour of the cathedral followed, led by Miss Welch our leader, and the pupils learned about the history of the building, learned how pilgrims crawled on their hands and knees up steps, which they were then urged to copy. Thereafter, each time we encountered steps they negotiated them on their hands and knees to much hilarity. The cathedral was full of laughter and chatter – not a day for quiet contemplation for other visitors!

The elaborate tombs of the great and good of the past evoked much interest – are they REALLY IN THERE?

The role of William Wallace, the diver who saved the cathedral from sinking into the swamp on which it was built, was of great interest and for those who braved the highest gallery they got to see the original heavy brass diving helmet he wore.

After a picnic lunch outside on the grass – the rain just held off - Bishop David led us in the Leavers’ Service, some 600 plus pupils from 16 schools sang their hearts out, paraded their banners with great pride and were blessed on their way out to the world of senior school. I am sure the memory of this special day will stay with them and remind them of what a wonderful time they have had as pupils of St Mary’s School.

It was a privilege to be with them.