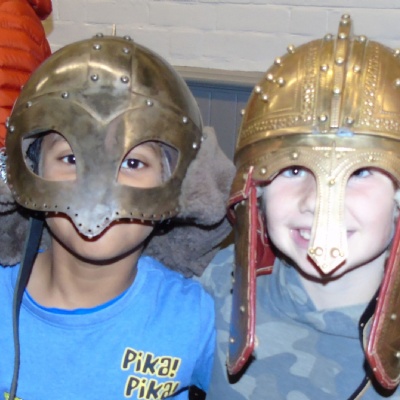 On Thursday 3rd and Friday 4th October, Year 4 enjoyed their visit to Oxenwood Activities Centre, near Marlborough in Wiltshire.

We were greeted by a fierce – looking, Saxon warrior who found it difficult to understand our modern language and modern ways… We also arrived full of hope that we would learn more interesting and exciting things about the Anglo-Saxons; our hopes were certainly fulfilled.

The day included lots of fun-filled drama and role play about why, where and how the Saxons invaded.  Year 4 also learned how to make an Anglo-Saxon bracelet by twisting silver wire.  The pupils had to work collaboratively and, as they soon discovered, it was not as easy as it looked.  However, as always, our children persevered and had a great souvenir to take home with them. Next, it was time to train on the battlefield.  We learnt how to make a shield-wall and defend ourselves from the advancing enemy (the teachers, LSAs and parents!).  The grounds at Oxenwood are fantastic for such adventures and well-resourced for supporting learning in the outdoors.  We are quick to add that the adults did use spongy balls and javelins during the battle! Finally, Year 4 were allowed to hold and explore some Anglo-Saxon artefacts (replicas) – it really brought history to life.

Overall, it was a terrific day which the children enjoyed immensely.  It has both enriched their learning and inspired them to find out more on their return to school.  We hope to invade next year once more!

Head on over to our photos page where you can see evidence of our fantastic visit...